This contrasts strongly with the actual lethality of the virus which is not based on the number of confirmed Covid19 cases, a figure which is biased towards the vulnerable sections and not a true reflection of the actual scale of infection in the population at large.

According to official statistics, the lethality of the virus is about 0.2% on average, which is in the same range as influenza, and 20 times lower than originally projected by the World Health Organisation.

It is becoming increasingly clear that the vast majority of these people, around 94%, died whilst suffering from other underlying diseases along with the novel coronavirus.

In England, official stats from Public Health England state that 95% of deaths were people with pre-existing conditions.

Many patients were ‘presumed cases’ without testing, but based on symptoms alone, as instructed by Government guidelines.

The PCR test used to diagnose Covid19 is notoriously inaccurate as a diagnostic test and skewed towards false positives. The inventor of the test, Dr Kary Mullis, described it as a very powerful manufacturing technique but not suitable for medical diagnostics. It picks up bits of viral RNA, not the whole sequence. This will test positive if one has the virus but will also test positive if one had the virus weeks or months ago and recovered since. There is also the possibility of other coronaviruses reacting to the test. Although the novel coronavirus has been sequenced, it has not yet been purified.

Testing worldwide was initially limited to hospitals, which included a greater proportion of elderly and immuno-compromised patients. Of course, as these were the most likely to die, whatever the cause, labelling their deaths as ‘from’ Covid-19 instead of ‘with’, artificially increased the apparent death rate, initially projected by the WHO as 4% but according to the latest research is 0.2% on average.

Notice that the government health organisations and most mainstream media do not reflect these distinctions and instead pronounce the deaths as due to Covid19.

This curious and worrying procedure is happening all over the world and sets a dangerous precedent of presuming Covid-19 cases, even when there is no novel coronavirus present in the body.

The W.H.O estimates there are between 290,000 and 650,000 respiratory deaths each year associated with influenza.

As pointed out by John Cullen, the CDC reported that as of August 28th, the total number of deaths in the US involving Covid19, but also involving influenza and pneumonia was 167,558. This was reiterated by the mainstream media as deaths due to Covid19. However, also noticed by Cullen was that, unlike the John Hopkins institute, the CDC also reported that of those 167,558 deaths, 74,326 excluded influenza. This means that 93,332 of these deaths included influenza as well as pneumonia and Covid19.

This suggests that it may be influenza, aggravated by the novel coronavirus and most importantly, the global response to it, that is leading to the excess deaths. 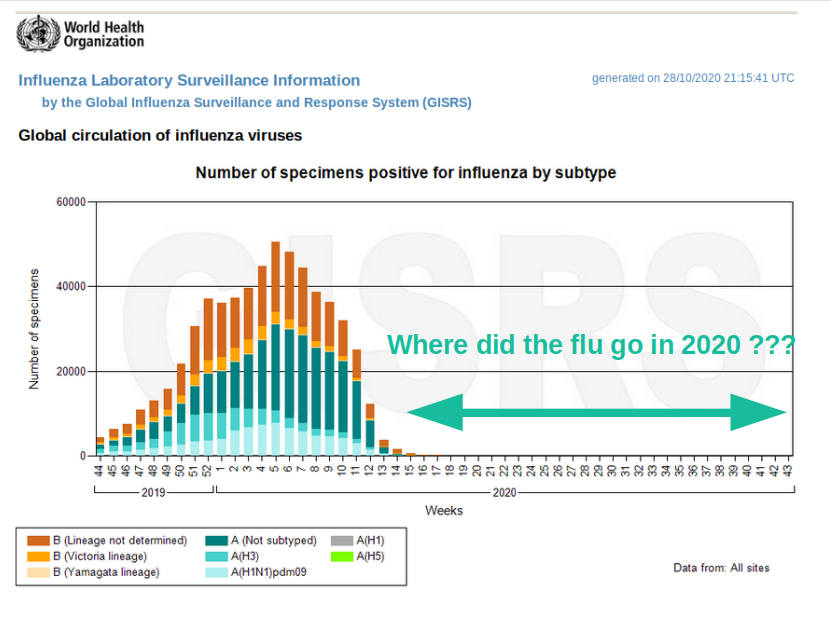 The CDC reports the number of deaths from all causes in the US as 1,801,150 which is 111% of expected deaths. Thus around 178,000 more deaths than expected have occurred.

Since the beginning of the BLM protests and riots in June through the opening of pubs and restaurants in July to the present, September 20th, death rates have remained low.

However, the media focus has shifted onto the number of cases, which due to the increased scale of testing and the fact that a simple positive test is diagnosed, incorrectly, as a case even if there are no symptoms all, give the false impression of rising when they were there all along.

This should be good news, as it reveals the true level of severity of the virus to be in line with influenza.

So, what have we learnt?

In due course we will look at the likely reason for the majority of excess deaths in hospitals and care homes as being due not to the novel coronavirus but to the lockdown itself.